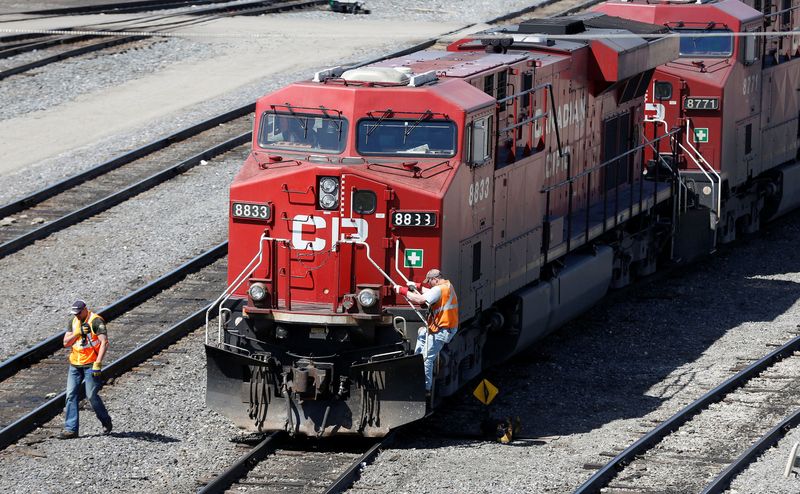 The strike is the latest risk to Canada’s battered supply chain, which last year weathered floods in British Columbia that washed out track and suspended access to Canada’s biggest port. The COVID-19 pandemic, a trucker shortage and costly global freight rates have also hampered the flow of goods and ignited food inflation.

Canada, the second-largest country by area after Russia, depends heavily on rail to move commodities and manufactured goods to port.

CP’s network runs across much of southern Canada, extending as far south as Kansas City in the United States. Grain is CP’s largest business.

Some 3,000 members of Teamsters Canada Rail Conference, including engineers, conductors and yard workers, voted this month to potentially strike just after midnight Wednesday. The union has not yet given the required 72 hours notice, however, meaning no legal work stoppage can occur before Friday at the earliest, a CP spokesperson said.

The main outstanding issues are wages, benefits and pensions, the union said.

“Should the (union) exercise its right to strike, CP will be unable to operate the railroad,” CP Chief Marketing Officer John Brooks said in a March bulletin.

CP said the key bargaining issue is the union’s request for higher pension caps. Chief Financial Officer Nadeem Velani said at a New York investor conference on Tuesday that the railway is unwilling to accept that demand.

Velani said the company is considering a lockout before any strike, but would also have to provide 72 hours notice and has not done so.

Manufacturers of goods ranging from food to cars are already struggling with supply chain disruptions, said a coalition of Canadian trade associations.

Numerous U.S. farm industry groups wrote a joint letter to President Joe Biden this month asking him and the Canadian government to avert a strike.

CP carries U.S. grain to Pacific Northwest export terminals, and moves potash fertilizer into the United States, which is critical ahead of spring planting season.

Potash prices have soared with western sanctions against Russia over its invasion of Ukraine, and against Belarus, the No. 2 and 3 producers after Canada.

A CP strike would have “serious implications” for potash transport to ports for shipment to offshore buyers, said Natashia Stinka, spokesperson for Canpotex Ltd, the company owned by Nutrien (NYSE:) Ltd and Mosaic Co (NYSE:).

Federal mediators are assisting the two sides in talks and the Canadian government prefers a negotiated settlement, said a spokesperson for the employment ministry.

The Canadian government can seek to pass legislation that would order workers back to their jobs if they strike.

Disclaimer: Fusion Media would like to remind you that the data contained in this website is not necessarily real-time nor accurate. All CFDs (stocks, indexes, futures) and Forex prices are not provided by exchanges but rather by market makers, and so prices may not be accurate and may differ from the actual market price, meaning prices are indicative and not appropriate for trading purposes. Therefore Fusion Media doesn`t bear any responsibility for any trading losses you might incur as a result of using this data.

Fusion Media or anyone involved with Fusion Media will not accept any liability for loss or damage as a result of reliance on the information including data, quotes, charts and buy/sell signals contained within this website. Please be fully informed regarding the risks and costs associated with trading the financial markets, it is one of the riskiest investment forms possible.

How to immigrate to Canada as a nurse in 2022