Billboard says Kanye West’s album, Donda 2, won’t be making it onto their charts despite millions in sales.  The charting giant pulled this same move with Jay-Z’s Magna Carta Holy Grail back in 2013 – he made them fall back. 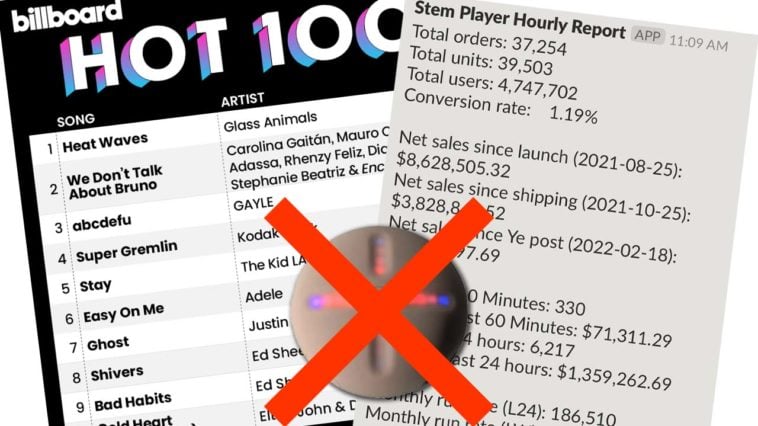 Kanye West’s elaborate multifaceted rollout of Donda 2 included synchronous drops of  BalenciagaXGap clothing, a live, multi-streamed listening event, and, the cornerstone, exclusive distribution of the album on his stemplayer.com platform and stemplayer devices.  By dropping DONDA 2 on his own independent platform, he skirted the streaming giants and pocketed all of his sales revenue.  And he also raised the ire of charting giant, Billboard, that says his alternative strategy doesn’t fit into their charting model.

According to receipts that dropped on his Instagram, Kanye earned over $92,000 per hour in pre-sales alone, making over $1.3 million in sales within 24 hours of releasing the device. per estimates.

Before the revolutionary release of the DONDA 2 player, Kanye took to his Instagram to call out streaming services, spotlighting their exploitation of hard-working artists and their music. His plan to bypass all major streaming platforms worked, as he is the sole owner of the stem device allowing him to take home the majority of the revenue from sales.

Kanye West’s Donda 1 debuted at No.1 on the Billboard 200 charts in August, but Donda 2 won’t be eligible although the album would be considered platinum based on estimates of units already sold.  Billboard says Donda 2 is ineligible because the album is being sold with a device that can be used for other means besides streaming of the album, such as mixing and mastering music.  As such, Billboard says the album falls under the new merch bundle policy that was implemented back in 2020, where albums sold with merchandise are not chart-eligible.

The issue of Kanye’s alternative distribution via his stemplayer device is one of many alt distribution strategies that artists are trying in pursuit of a larger piece of their sales revenue.  The new blockchain technology trend has many artists and labels looking to release music and projects via “metaverse” tools like cryptocurrency and NFTs.

If Billboard is to stay relevant, they will have to update their thinking on chart requirements.

This isn’t the first time Billboard has made it hard for an artist to top the charts with the non-traditional sales of an album. Back in 2013, Jay-Z released his album, Magna Carta Holy Grail, via a joint deal with Samsung that had the entire digital album pre-loaded on over 1 million devices.  Billboard initially rebuffed the release, saying it would not include the album on the charts.  However, Jay-Z argued (and won) that the unprecedented deal was the equivalent of Samsung purchasing over one million digital copies to exclusively release to their customers. The physical album officially dropped 5 days after the digital release.  Jay-Z’s unique marketing and distribution strategy was unprecedented, introducing a new method of distributing music. Magna Carta ultimately topped the Billboard charts and prompted then RIAA director Liz Kennedy to announce changes to their distribution and streaming rules.

She stated: “It is a novel and creative marketing move and it has rightly stimulated a healthy conversation about the sale’s meaning and implications for the modern music business.” She continued saying, “For us, the move prompted a re-examination of our historic Gold & Platinum (G&P) Program award rules. As we dug through the records of audits, re-reviewed rules and consulted with our auditing firm of more than thirty years, Gelfand, Rennert & Feldman, we discovered one rule disparity that no longer makes sense.”

In a dizzying rollout of innovations and new products, Kanye West has made another pivot – this time into sports and athletic wear.