TALLAHASSEE, Fla. (AP) — Florida’s Republican-dominated legislature passed a bill Tuesday to forbid instruction on sexual orientation and gender identity in kindergarten through third grade, rejecting a wave of criticism from Democrats that it marginalizes LGBTQ people.

The proposal, which opponents have dubbed the “Don’t Say Gay” bill, now moves to the desk of Republican Gov. Ron DeSantis, who is expected to sign it into law.

Since its inception, the measure has drawn intense opposition from LGBTQ advocates, students, national Democrats, the White House and the entertainment industry, amid increased attention on Florida as Republicans push culture war legislation and DeSantis ascends in the GOP as a potential 2024 presidential candidate.

The bill states: “Classroom instruction by school personnel or third parties on sexual orientation or gender identity may not occur in kindergarten through grade 3 or in a manner that is not age appropriate or developmentally appropriate for students in accordance with state standards.” Parents would be able to sue districts over violations.

Republican Rep. Joe Harding, who sponsored the measure, and other GOP lawmakers in Florida have argued that parents should be broaching these subjects with their children, rather than educators. It would not bar spontaneous discussions of sexual orientation and gender identity in schools but instead is intended to prevent districts from integrating the subjects into official curriculum, Harding and supporters have said.

“I know how important it is to empower parents in this relationship. I want to encourage parents across Florida to own it,” said Sen. Dennis Baxley, a Republican who carried the bill in the Senate. “They’re your kids, and it is tough — it’s tough to figure out what influences will be on them and what kinds of decisions they will make and how that all comes out.”

Democrats have often said the bill’s language, particularly the phrases “classroom instruction” and “age appropriate,” could be interpreted broadly enough that discussion in any grade could trigger lawsuits from parents and therefore could create a classroom atmosphere where teachers would avoid the subjects.

Statewide, the bill has sparked a swell of protests and student walkouts. Dozens of students and advocates flooded committee rooms during the proposal’s early stages and then packed into the halls of the legislature as it moved toward final passage, often with chants of “We say gay!”

“We have failed as a legislature if hundreds of kids stand outside screaming for their rights and you can’t explain to fifth graders and sixth graders and eighth graders simple definitions of your bill. You’ve failed,” said Sen. Jason Pizzo, a Democrat.

In the bill’s early stages, Harding filed an amendment that would have effectively required a school to inform parents if a student came out as LGBTQ to a teacher, renewing widespread condemnation of the measure. Harding withdrew the amendment as it picked up attention in media and online.

“Nothing in the amendment was about outing a student. Rather than battle misinformation related to the amendment, I decided to focus on the primary bill that empowers parents to be engaged in their children’s lives,” Harding said in a statement.

DeSantis has chafed at calling the proposal the “Don’t Say Gay” bill because he said the bill would apply to instruction on any gender identity or sexual orientation. He said it was inappropriate for teachers to discuss those issues with children in kindergarten through third grade.

“We’re going to make sure that parents are able to send their kid to kindergarten without some of this stuff injected into their school curriculum,” the governor said Monday.

The White House, which has sparred frequently with DeSantis over a wide range of policy, had previously criticized the measure and President Joe Biden, a Democrat, has called it “hateful.” On Tuesday, shortly after the measure passed the statehouse, U.S. Secretary of Education Miguel Cardona issued a statement that read “leaders in Florida are prioritizing hateful bills that hurt some of the students most in need.”

“The Department of Education has made clear that all schools receiving federal funding must follow federal civil rights law, including Title IX’s protections against discrimination based on sexual orientation and gender identity,” Cardona wrote. “We stand with our LGBTQ+ students in Florida and across the country, and urge Florida leaders to make sure all their students are protected and supported.” 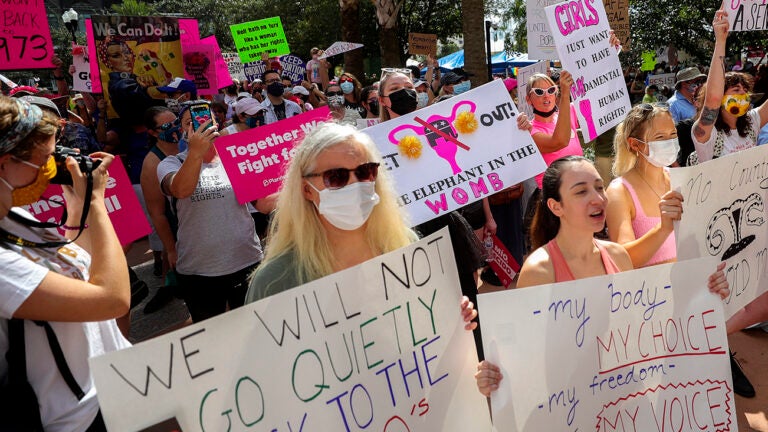