Watches are for human wrists, unless you’re talking to Robbie Jones. He is the brains and hands behind the cult Instagram account eloquently named Tiny Ass Props. Jones makes, as the name suggests, very tiny watches – watches not meant for the wrists of you or me, but rather for dolls (well, actually action figures).

There’s a collecting community out there for figurines that rivals even the watch world. Great detail is paid to the sculpting and creation of figures based on characters from pop culture, but Jones noticed a massive void in this community of small things. For all of the craftsmanship in the likenesses and wardrobes at one-sixth scale, nobody was making character-appropriate watches with any sort of detail. So a few years back, he set out to change that. 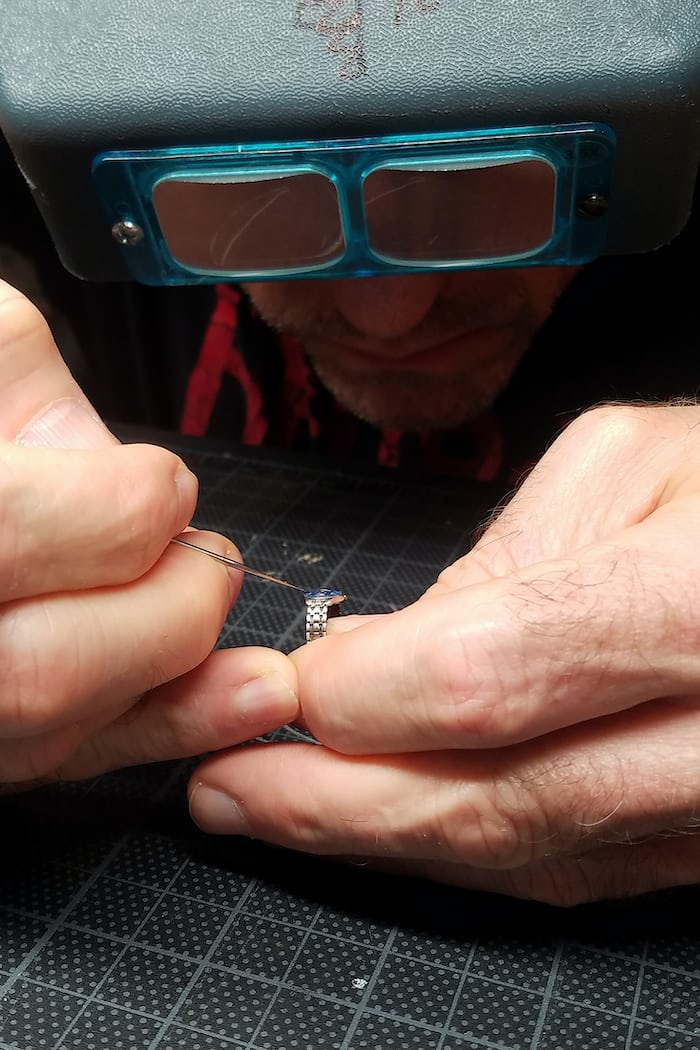 Now he has a customer base, and a social media account with a growing following where he documents the process behind his teeny tiny creations. But that’s not all Jones is up to. Following his stellar work in tiny prop-making, he recently moved to Portland where he’ll be joining Laika Studios – of Coraline and ParaNorman fame – in their stop motion props department. I had a chance to speak to Jones and find out the full story behind his work and these tiny ass watches.

HODINKEE: How did you get into this line of work in the first place?

Robbie Jones: I started about 10 or so years ago. I got into the doll collecting community. I grew up in the eighties with the little G.I. Joes and stuff like that.

I started collecting those and then I got introduced to the custom market. At that time there were manufacturers that would do unlicensed creations. They would sculpt things. And then there are these tailors who make these very elaborate costumes. So I started making little props because I have an MFA in theater design, so I already knew how to build. I’ve been building my whole life, but I just decided to give it a go and shrink stuff down. 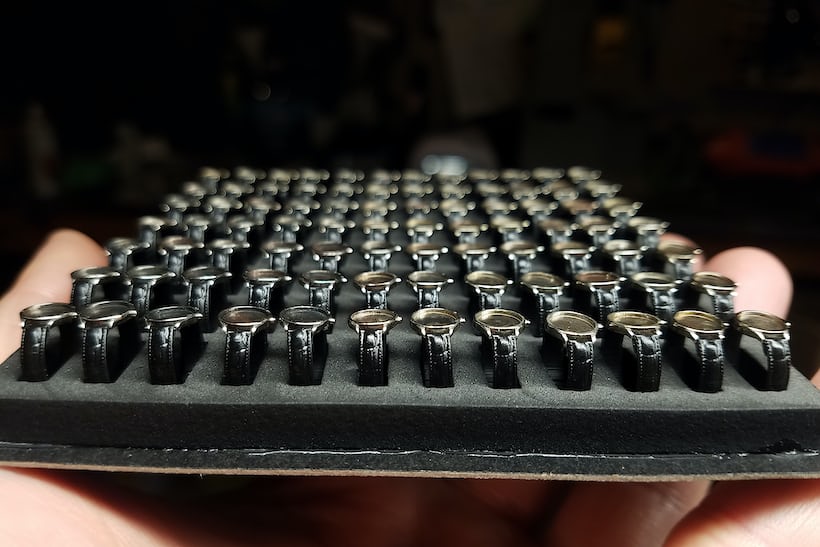 So I began doing this full-time and one area that was never really touched on much was watches. Even the major production places would do kind of crappy versions of the watches. And I thought – and this is back when Breaking Bad was really, really big – that I could probably make a Breaking Bad watch. So I gave it a go and started making watches because that seemed to be the area that I excelled in and something not a lot of people were doing. I still kind of stand above everybody when it comes to making tiny watches.

Would these be the size that would fit onto some kind of figure or figurine?

Yeah, for a 12-inch figure. We call this the one-sixth scale community, so that’s what we’re talking about.

Was it the Breaking Bad watch that kind of served as the impetus for you moving into watches?

Well, nobody had made Walter White’s Tag Heuer Monaco. Everything that was being produced around Breaking Bad was all unlicensed, so people would focus on head sculpts and clothes and shoes and making sure everything’s perfect, but nobody was making watches. And so I thought, “Well, I’ll give that a go.” 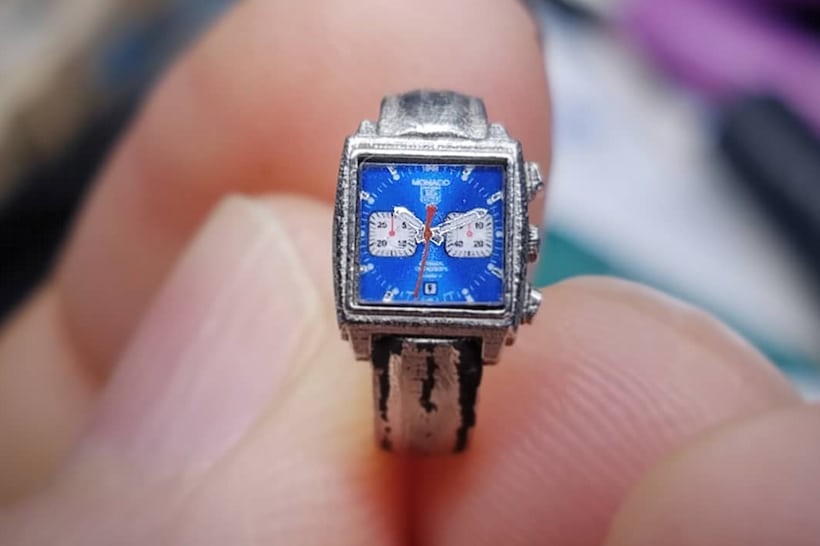 It started with some 3D modeling in a theater drafting program, which is what I still use today, then a little Photoshop. So I build all the dial specifics in Photoshop. I’ve gotten really elaborate over time, but yeah, that was the impetus for me starting – the Monaco.

Before you entered the fray, would any 12-inch figures be wearing watches, and was any attention paid there?

It would be like a really clunky lump of plastic and they would print out something and put a sticker on it – that kind of thing. It seemed like a thing to make. 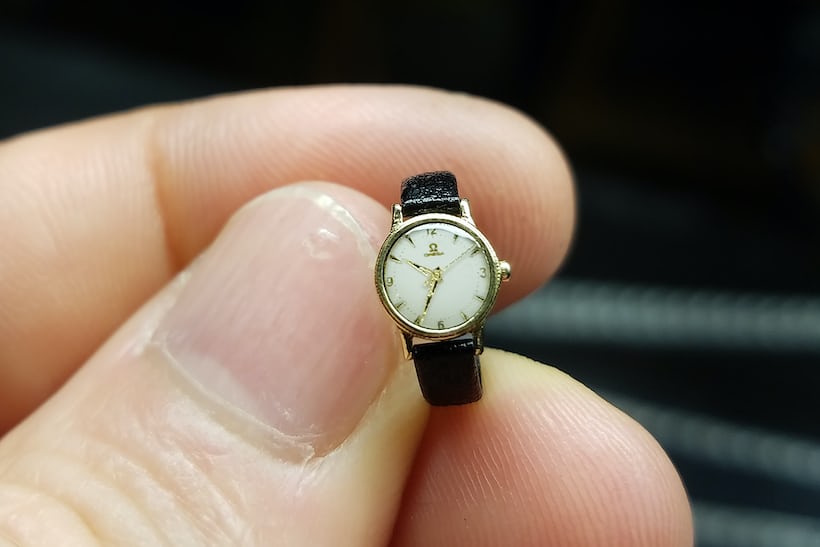 But since then, in the last however many years I’ve been doing this, I really started to appreciate not only watch design in the high-end watch area, but also how watches are manufactured. I’ve been watching tons and tons of YouTube videos on how things are milled and stamped. I have always found it’s easier to reproduce a prop, even scaled-down, using the methods as close as you can to those that were used on the real thing. So instead of trying to invent a way to create it, it’s so much easier just to figure out how they made it and then just shrink everything down using a similar technique.

After selecting a watch to reproduce, and taking it through your Photoshop process, what is the manufacturing process from there?

I build a 3D model and it’s printed in lost wax [the process of metal being poured into a mold through a wax model] using a jeweler. There’s a casting house out in New York that I use. They’re doing things like rings and pendants and high-end platinum and then I’m sending them this stupid little tiny thing. 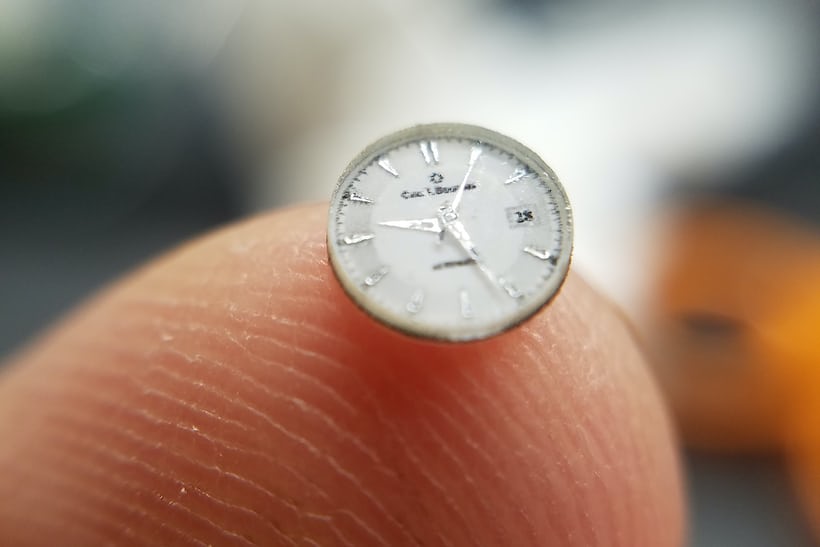 When you think in terms of the dial itself or the case itself, it’s smaller than your fingernail. So the problem with lost wax casting is how to polish without losing everything. No matter how well I polish, there’s still a variation in the surface that I want it to be perfect. I’m obsessive-compulsive, or at least I have tendencies. So I’m just trying to find a better way to produce a case. I do know that the ability to do micromachining is there, I know it’s possible. The question is how do I go about accomplishing that? That’s the evolution that I really want to get to, where I’m literally machining out the cases for these.

What is the base material that is being printed? 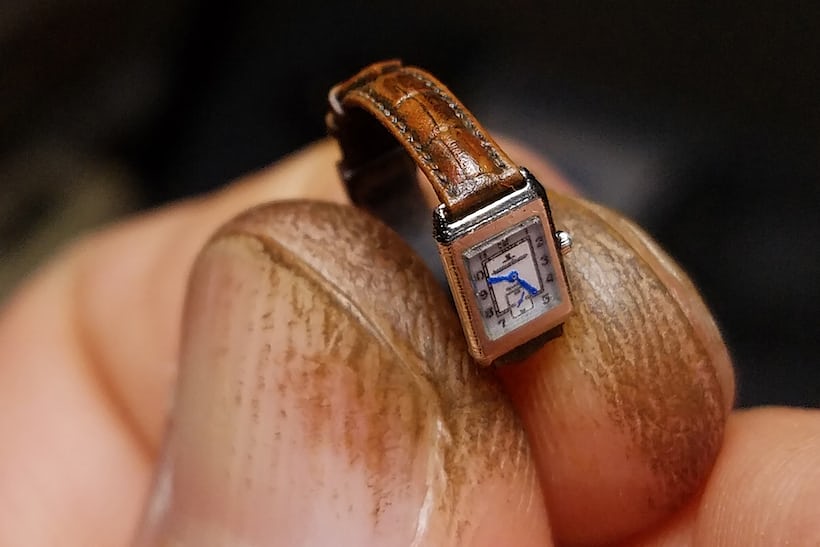 Most of the time, what I use is brass. It’s what they call white brass, which basically means that there’s a lot of zinc in it. It comes off as a much whiter metal. I could use silver but silver tends to be on the white side, whereas this white brass has a tendency to be a bit darker, so it kind of matches stainless steel a little bit better. If it’s a gold watch, then I often use brass.

What comes out of the 3D printer and how much finishing work do you need to do? Once it’s printed, what do you have to do by hand?

The [James Bond] Omega Seamaster that I made was actually done in plastic, which I try to avoid because collectors, especially doll collectors, really want metal.  If the components of a watch are metal, then I try to replicate those in metal. And if they’re leather, then I can usually get away with some form of plastic. Like the Casio watch that I did, those were all completely plastic. 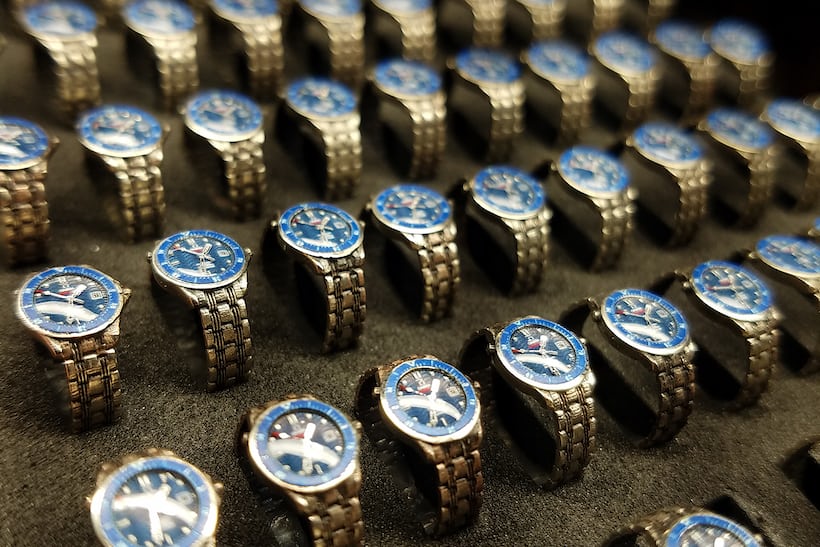 For metal watches I send the foundry I use a digital model, and they print it in wax. Then they burn out the wax and replace it with metal. They then send me those parts. Next, I have to go through and individually polish out all the areas, because even as good as they are, there’s still no texture to it. That is a real pain because I really have to get in there with tiny little polishers and try not to obliterate all the detail, but at the same time, get some of that surface smooth.

Do you sell the miniature watches on their own or are these ending up on figurines somewhere?

It depends. Sometimes I collaborate with artists. There’s a guy I’ve been working with forever out of California and he’s a sculptor. So what he does is he’ll sculpt the head. There’s a tailor out of Korea that he uses and she does all the tailoring for the costume. And then I end up doing all of his accessories – we just did Hook. In those cases, I do a group of 30 or 40 and finish them all up and then send them to him. And he puts them on his figures and he sends those out to the collectors who have pre-ordered. The Omega watches that I made are sold mostly to individuals. 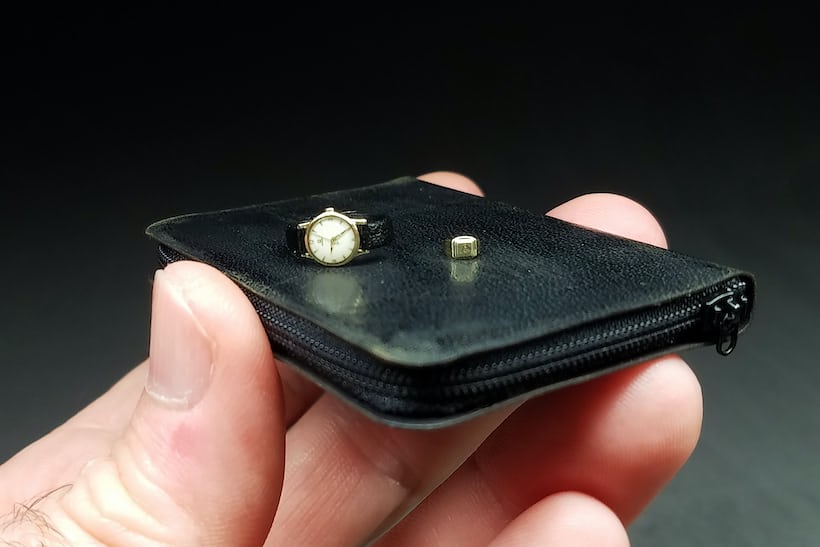 When it comes to the Patek Philippe Nautilus watch that you created, I can’t think of a film that would be connected to it just, it strikes me that you just dove into the world of watches a little bit with something like that. Is that right?

Yeah. Well, about two years ago, a jeweler on Instagram had taken one of my photographs of me holding one of my watches in my fingers. They Photoshopped a Patek into my fingers and then posted it on their Instagram account making a joke about it being the only kind of Patek anybody can afford.

I was like, “I wonder how close I could get to that Photoshopped picture?” And so I started building a digital model just on the side, with no request, just to see if I could do it, and then I started getting requests from people saying, “this would be a great ring.” 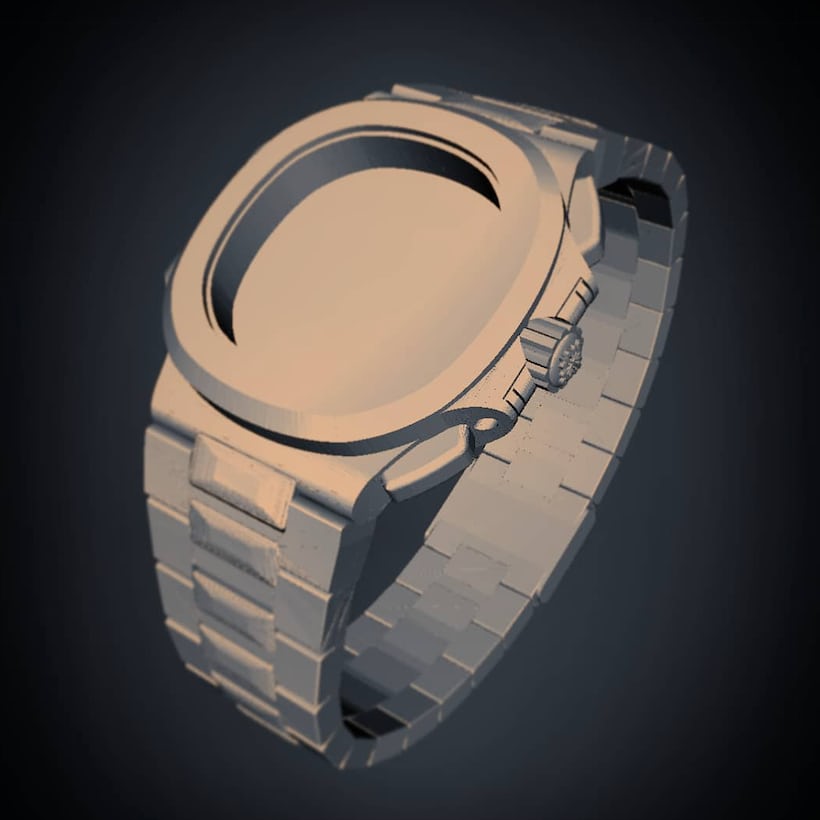 But I’m busy, and I just kind of put it off to the side. And then with COVID and everything, I lost my job in the theater so I went back to it and wondered what it would be like if I tried to make a ring.

I figured I would just post it to my Instagram because people have been asking me for this stupid ring forever and I was curious what the response would be. I posted that picture on my account and I labeled that it was a plastic painted prototype. For about a month, I got no response. 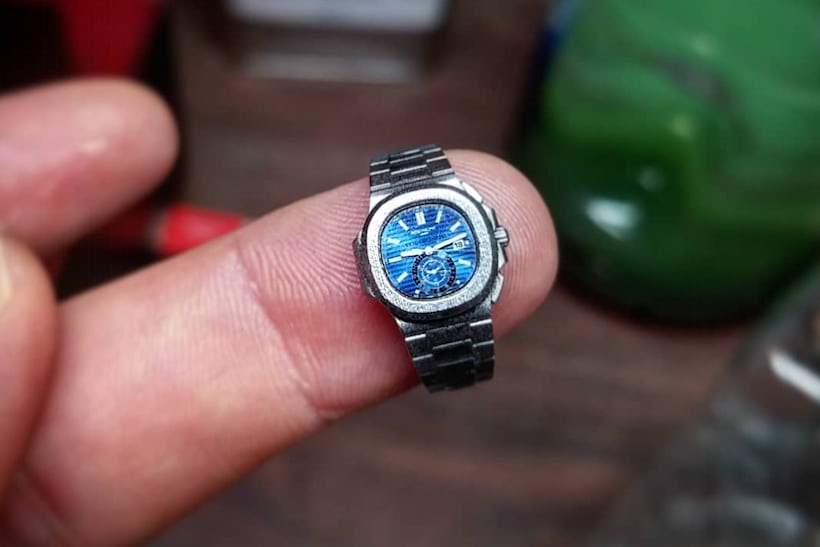 And I was like, okay, I’m glad I didn’t waste any of my time on that. Then all of a sudden, it got picked up by somebody, a watch Instagram person that had a hundred thousand followers or something like that. Within a day I had over a hundred direct messages from people wanting to buy the watch. It kept like that for about two or three days – about a hundred to 150 direct messages every day.

Is the Casio Calculator your latest creation? 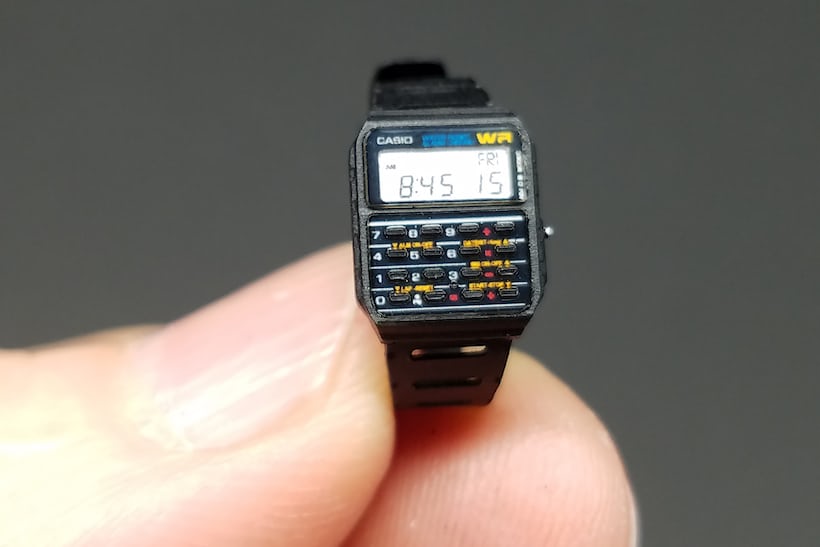 Yeah, I had been commissioned to do a version of the watch two years ago. This is for a quarter-scale figure, not a one-six scale, so this is bigger. These technically are for Walter White. That’s what he wore before he got the Monaco. And then also Heath Ledger wore it in the bank heist scene in The Dark Knight. So this one’s actually geared for those two particular characters, specifically.

Do you wear a watch yourself?

I have a $500 Tissot 1853 with a black dial. I had a Timex and thought, screw it, I want to get a mechanical watch, an automatic watch. And so this one seemed to be pretty cool. I like the look of it. So far it’s been awesome, it’s my daily watch. 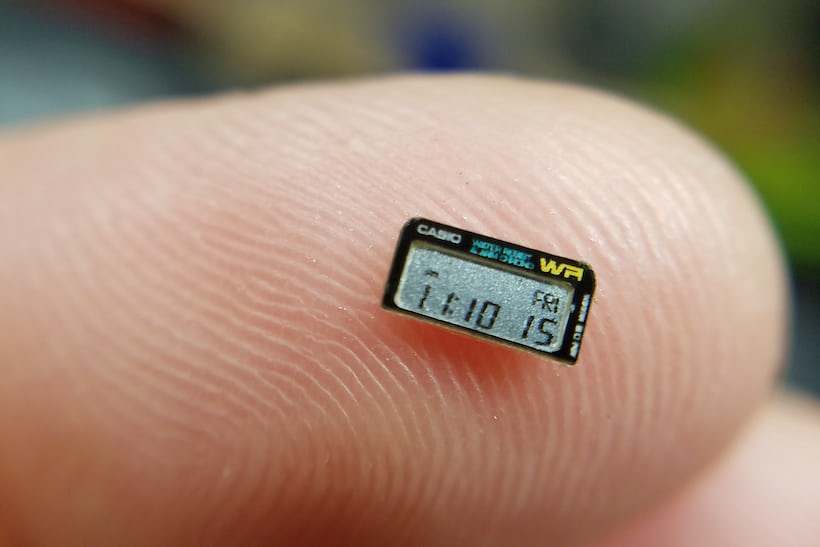 All photos provided by Robbie Jones

To see more of Robbie’s work, head over to his Tiny Ass Props page on Instagram where you’ll find many more photos of tiny watches, as well as his contact information.