The University of Health and Allied Sciences (UHAS) has conferred an honorary Doctor of Science degree on the Executive Chairman of the Jospong Group of Companies (JGC), Dr. Joseph Siaw Agyepong.

He was honoured in recognition of his outstanding contributions to environmental sanitation and higher education in Ghana and beyond.

The Chairman of the Council of the UHAS, Justice Victor J.M. Dotse of the Supreme Court, and the Vice Chancellor of UHAS, Professor John Owusu Gyapong, together, decorated Dr. Siaw Agyepong with the honours last Saturday at the second session of the 6th UHAS Congregation at Ho, Volta Region. Some 692 students were awarded degrees in various academic disciplines at the event. 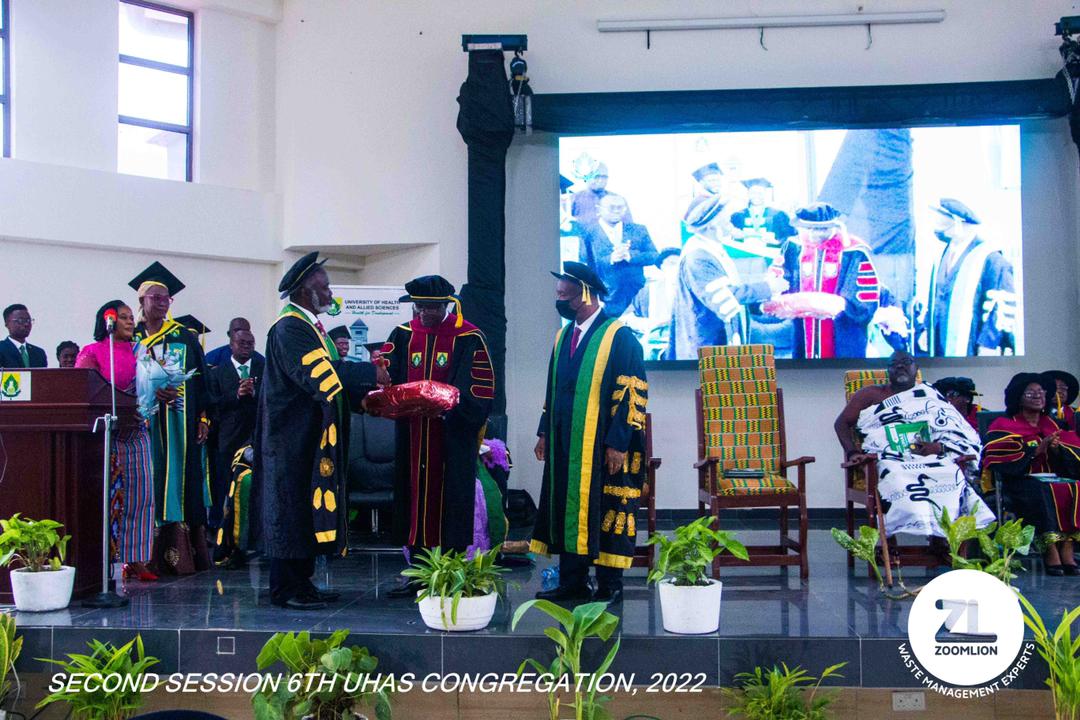 After receiving the honours, Dr. Siaw Agyepong thanked God for his life, stressing that he was very humbled by the honour done him by the university.

“I also want to thank the UHAS Council Members, my wife, Mrs. Adelaide Agyepong, my children, management and staff of the Jospong Group of Companies and everyone who has invested in my life,” he expressed.

He disclosed that his group will present a cheque of $100,000 to the UHAS to set up an award scheme for research. 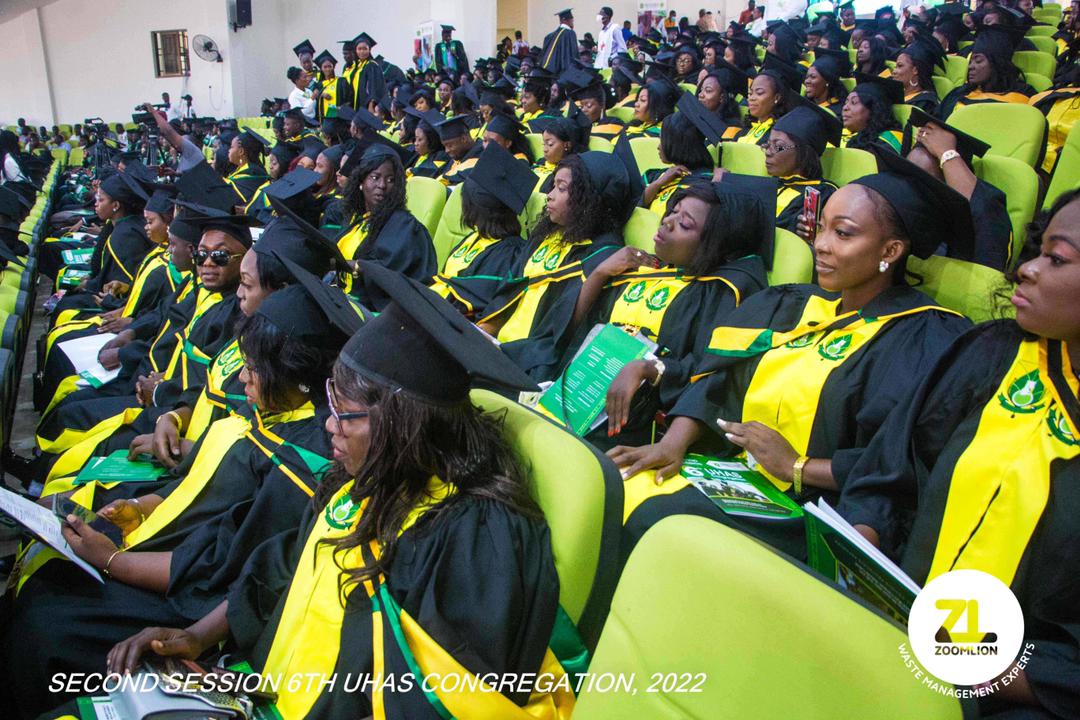 A citation accompanying the honour said: “The University of Health and Allied Sciences is, therefore, proud to be associated with you and delighted to honour you this 9th day of April 2022, with the Honorary Doctor of Science degree (Honoris causa) for your excellent leadership; for your innovative business solutions that continue to add value to the everyday lives of Ghanaians; for your service and care to countless communities all over Africa, and for the integrity in which you walk as you represent us globally.”

It continued, “your contributions to environmental sanitation and higher education in Ghana and beyond are unmatched in scope, and have been accurately described as phenomenal.”

The citation said over the years, “your visionary leadership has brought us the Jospong Group of Companies, which has earned you global recognition for job creation that has improved thousands of household incomes.” 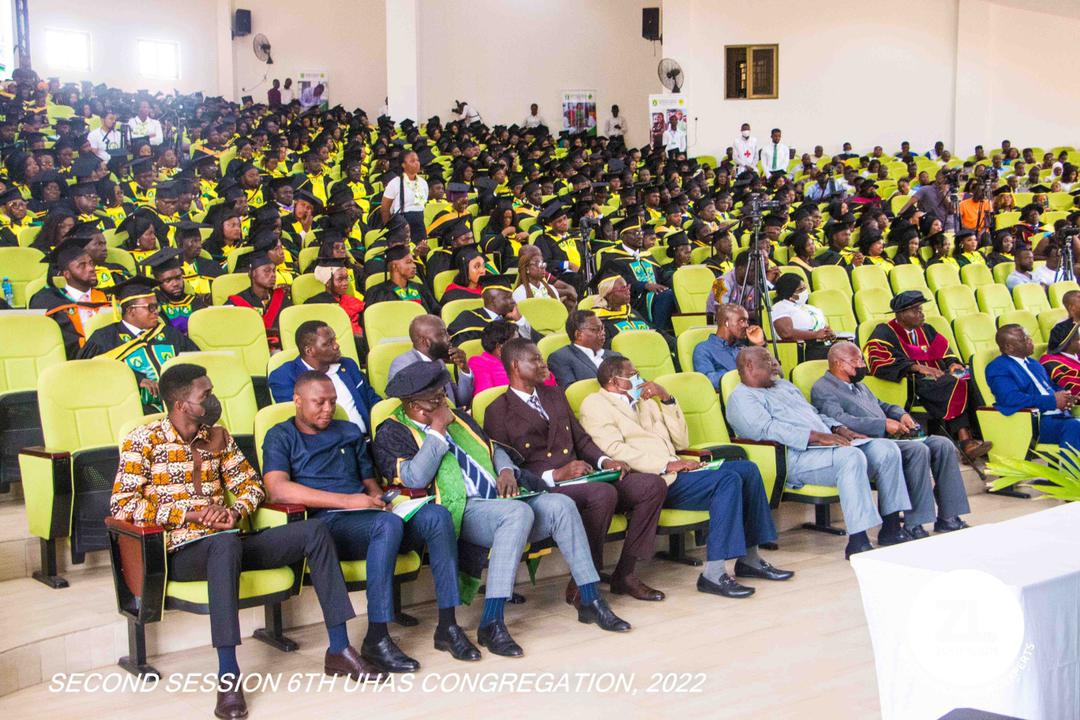 Further, it also described Dr. Siaw Agyepong as “the embodiment of the UHAS core values of Excellence, Innovation, Integrity, Service and Care.”

Earlier, in a brief motivational speech, Dr. Siaw Agyepong admonished the graduates to put God first in all their endeavours and chosen careers.

However, he cautioned that the “pull him syndrome” and other demonic forces were still operational in the country.

“Practically, God has been my strength,” he asserted.

Again, he encouraged the students to look as far as they could see, using how God blessed Abraham enormously to buttress his point.

He told the graduates to always leverage and treasure opportunities they have and those that will come their way. 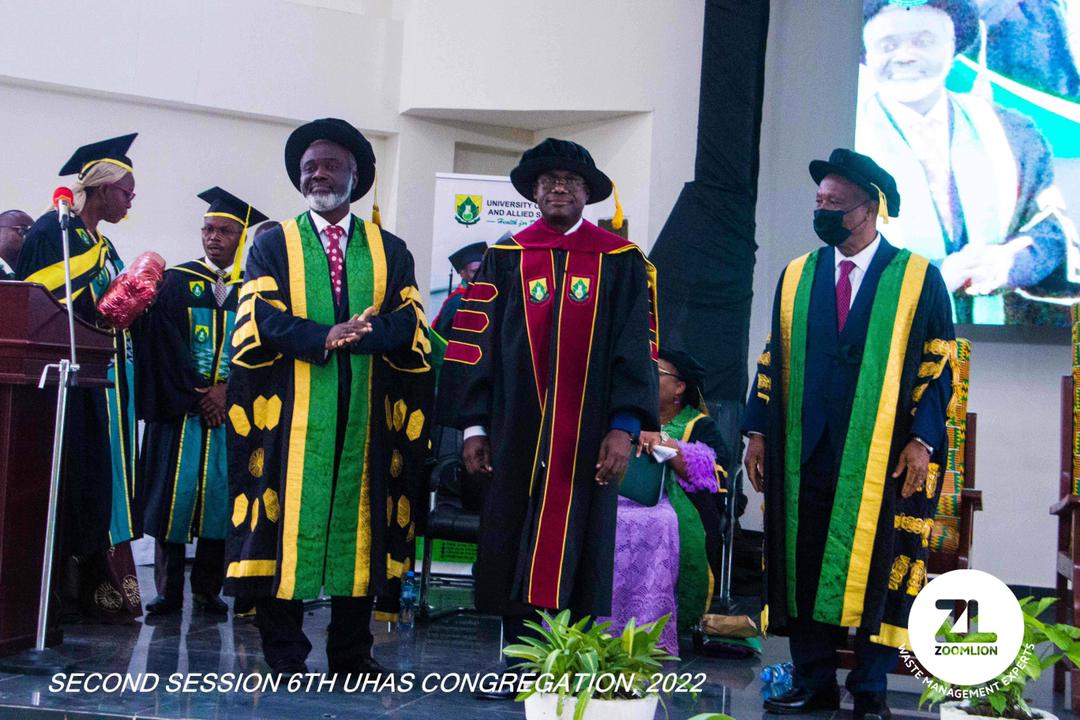 “Be ready to learn, explore and also teach others, stressing that “from today watch things twice.” he charged the students.

A former student of Royal Technical Institute at Nungua in Accra, Dr. Siaw Agyepong studied for the City and Guilds of London Certificate, which he completed in 1990, graduating with an Electrical Engineering Technician (Part II) Certificate.

He became a Chief Executive Officer at the age of 25, and helped to transform his mother’s exercise-book business into Jospong Printing Press in 1995.

He has proven to be a visionary leader with a remarkable knack for recognising business opportunities and building strategic partnerships to implement his vision.

He is the founder and Executive Chairman of JGC with 60 subsidiaries, with core staff members of over 6000, 55000 operatives, and creating over 250000 job opportunities for people of different ages, genders and cultures.

He has held and continues to hold various positions and serve on boards in a number of public, private and international institutions, including being a member of the Annual New Year School Corporate Advisory Team of the University of Ghana, and; Vice Chairman of the Enterprise Development the Kwame Nkrumah University of Science and Technology (KNUST). He also serves as an advisory board member of the Harvard Centre for African Studies and is a member of the Veritas Society.

He is currently the President of the Environmental Service Providers Association (ESPA).

For his enormous contributions to the environmental sanitation space, Dr. Siaw Agyepong has won several awards. In 2008, former President John Agyekum Kufuor conferred on Dr. Siaw Agyepong the Award of the Order of the Volta, which was followed by the Best Entrepreneur of the Year 2010 by the Entrepreneurs Foundation of Ghana.

The University of Ghana, Legon in 2013 also conferred the Platinum Vessel Award on him in recognition of his meritorious selfless services and contribution towards national development.

What does the future of the MCU look like after Doctor Strange 2?